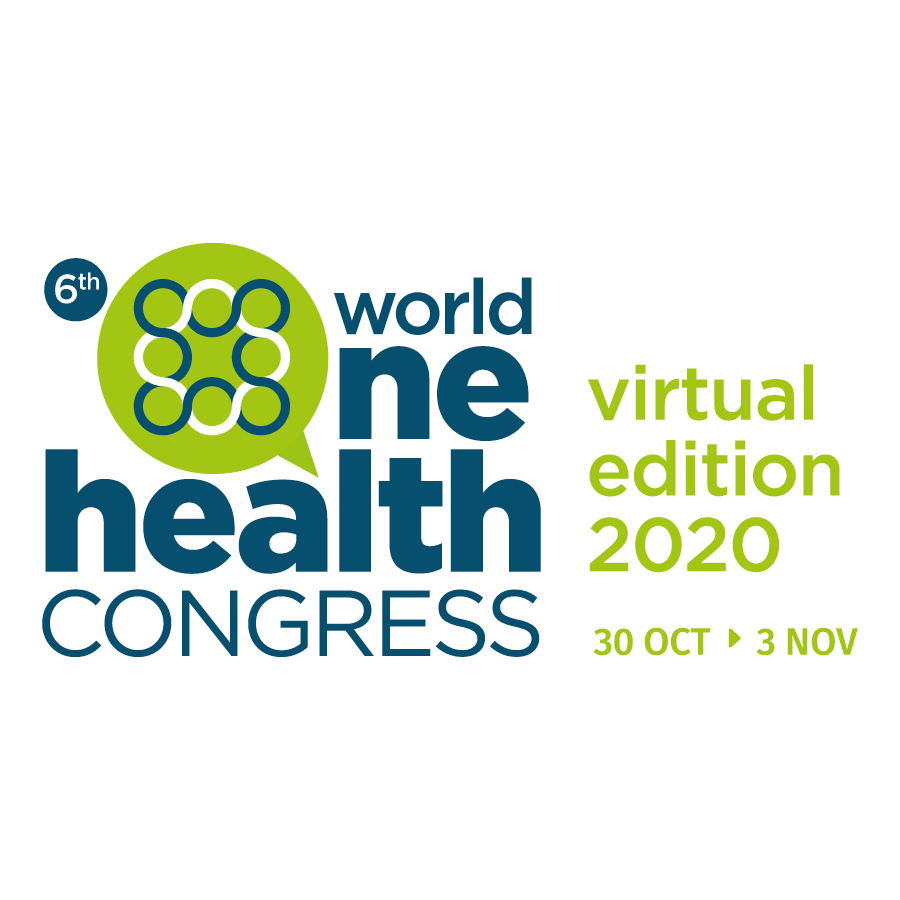 I was fortunate enough to attend the recent World One Health Congress 2020. This was my first engagement with the One Health community that I became fascinated with during my PhD.

Unfortunately, as you might expect, the conference had to move to a virtual platform. It was a real shame not to be able to interact with the community face to face. Instead I tried to increase engagement by becoming more active on twitter – it was no replacement for in person meetings, but better than nothing.

For those who haven’t come across the One Health approach before, an early definition is:

“the collaborative efforts of multiple disciplines working locally, nationally, and globally, to attain optimal health for people, animals and our environment”
One Health Initiative Task Force, 2008

However, the One Health approach has been evolving, and it now means different things to different people. The traditional One Health triad is human health, animal/plant health, and environmental health, but one of the messages from the conference was that there is an appetite for more communication, collaboration and general involvement from sectors outside of this triad.

I’ve heard/read that the One Health community is dominated by veterinarians and medics, and that medics are less engaged with One Health. That said, the social sciences have been brought into the forefront more recently but, relatively speaking, the community still appears to be a sea of veterinarians. As an ecologist I’m keen to see a more prominent role from people with my background; after all, both tackling zoonotic diseases and related conflicts with domestic animals and wildlife go hand in hand with the study of ecology. However, I recognise that, due to my relatively recent interest in the subject, I may be naïve to any prominent role in the community by ecologists.

With this in mind, I was interested to know more about the more general engagement of the different sectors of the One Health triad. To get a better insight into this, during the conference, I started a twitter poll asking participants of the conference which sector they best represented. I appreciate that it can be hard to choose just one sector, and many researchers will feel their work interfaces multiple  sectors. For instance, I could argue that my research sits in the environmental health sector but, if I had to choose one, I would put myself in the animal/plant health sector, as my research to date (particularly that on dogs and Guinea worm) has been concerned with risk factors for animal infections and informing interventions to reduce disease in animals. 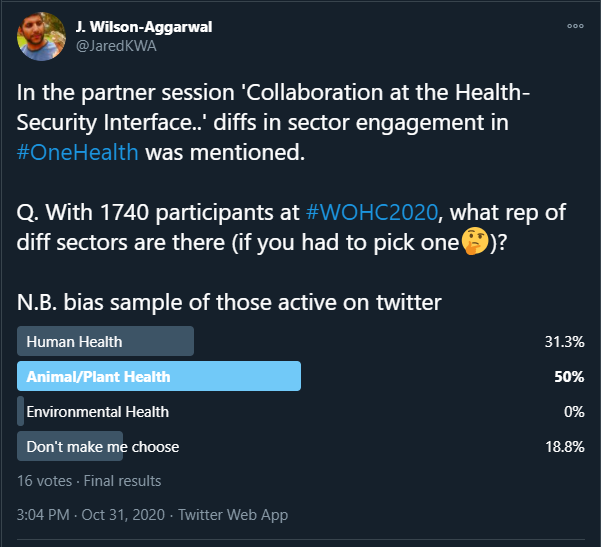 Unfortunately there wasn’t a large response. With a small sample size (~1% of participants) we can’t infer much, but the poll seems to reflect what I’ve heard/read and, most strikingly, there is little representation of the environmental health sector, which has been noted recently (see here). So it would seem the community still has room for growth before it is representative of the concept it desires to be.

The above is a distraction from what was a very good conference. I am supportive of the One Health approach and I hope I can integrate better into the growing community. The conference was very encouraging for global disease management, and it was great to see the various collaborative efforts being made to better the health of humans, animals, plants and the environment.

Below are some of the highlights from the talks I ‘attended’ at the conference. This doesn’t include any of the great posters (>900) or the many talks on anti-microbial resistance (which was a major component of the conference that I hope to catch up on before the talks are taken down in December).